I managed to get my first game of SAGA played last week and I am impressed. The rules are relatively simple though we mananged to make a lot of mistakes and certain bits are still confusing. The army creation rules couldn't be more simple. Dark Age warriors are all relatively similar in terms of ability and equipment. One of the draw backs in the game that I think will annoy me is the lack of differentiation on the battlefield between the factions. A Breton, Welshaman and a Scot look the same in 25mm scale. That is a minor drawback though and the gameplay makes up for it. 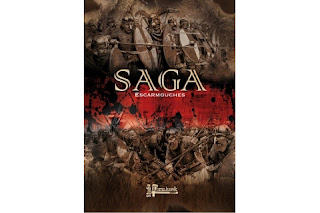 Attack/Defence Mechanism: This is an interesting part of the game. Whenver combat is joined either player can choose to remove half of his attack dice and place half of them as defence dice. With higher classes of warriors such as Hearthguard and Huscarls who already have decent armour this can go really far towards protecting them. In turn this creates a real push and shove simulating nicely the shieldwall that was prevalent in the period. The loser of a combat has to disengage up to 4". They can of course activate again and go for another combat slowly piling up the casualties.

Battleboard: The battleboard is a strange beast. At the start of the turn you roll a number of dice and assign them to certain areas on the board. These areas correspond to unit types and general abilities. The unit type section allows you to activate one unit of that type for each dice there in the order you choose. Interestingly the better your unit is the easier to activate. Units can be activated as many times as you want during a turn. The other sections are thematic abilties. I played as the Anglo-Saxons and I was often getting bonus dice for defence. The main point of interest was the bigger my units the bigger the bonus I recieved.

Fatigue: Each subsequent action that a unit makes means it acquires a fatigue point. These can be spent at any point during a turn by your opponent to cause you some headaches. They can reduce your movement or your combat ability. This really gets nasty as at certain points you might be face to face with the enemy but moving into them would generate fatigue that will really cause problems. You can rest as an activation which reduces fatigue. Combining this with the battleboard generates a lot of tactical depth.

These are some of my Northumbrian Saxons from a good few years ago. I have a massive, unassembled army of these. I am hoping that I can find some regular opponents here in Hamburg to play against so that I can bring these models out of retirement. I never really played Warhammer Ancient Battles despite having this army. I was an avid Fantasy Battles player and I think that SAGA will replace Warhammer for me. Warmachine is great but it doesn't provide me with the same narrative that Warhammer did. The game is exciting and dynamic but it doesn't tell the same story. SAGA does and I look forward to getting more games of it played.

Here are some links to other interesting sites talking about the game: Game Play disscussion Tapestry Blog