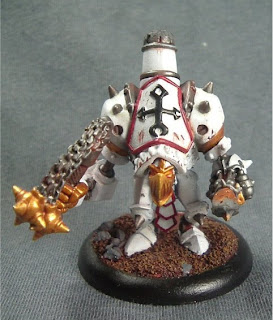 So here is my Repenter. Another model complete for the Prime Challenge. Thankfully this week has been relaxed in some ways and I have managed to get some paiting in over the course of a few evenings. I had some good luck yesterday combined with some bad. I had a lot of my belongings shipped over from Ireland to Germany. Practically anything that could have been smashed was smashed. The good luck part is that I decided not to send the remnants of my menites in these packages! That would have been terrible. I can't imagine that my Crusader and Guardian could have survived despite the best efforts of my pinning. While I know the delivery service can be rough in the handling of packages mine really must have had some fun. There were wooden boxes inside that were cracked. So I will have to wait for a visit home to pick up my remaining faithful but at least they should arrive in Germany intact this way. At least I have been able to adequately build up my forces here so that I can play with the rest.

Here is a rear shot just to prove that I actually paint the backs of my miniatures! We used to joke that GW miniatures were only painted in the front and thats why they could paint so many so quickly! Looking at the shots here I notice I forgot some stuff, mainly the black lining on some of the armour plates. I also need to do the bases once I have the varnish applied to seal the pigments. I am going to do this as a big batch towards the end of the project as I am lazy at the moment and it feels good to get the models off the painting desk and into the painting cabinet! I have a varnish for the water pools on the bases but as the brushes need to be cleaned with turpentine I don't really want to do it individually. It is an acrylic varnish but for some reason I need turpentine to clean up after it... I wasn't paying attention to the bottle. It was also pretty expensive so I don't want to waste it.

Here you can see some weathering again. I have finally managed to get the chipped armour to look how I want it. With the previous three 'jacks it came out fine but not really like it looks in other peoples tutorials. Here you can see the arm plate. The strong lights I needed to get this in focus destroyed the highlights on the armour but you can see the chips pretty well. Even though this area didn't get much hairspray on it you can see that the chips here are much finer than before. Rather than large sections coming off I managed to get some lines and dots in too.

The secret was to apply the hairsparay and paint as mentioned before. The once you are ready to make the chips simply brush some water over the area and leave for about fifteen seconds. This will then soak through the upper layer of paint and then you can begin the process. It gives a much much finer result and is a lot easier to work with. I discovered this half way through this 'jack so I don't expect to really get it perfect until I am doing in on the Castigator. All I need now is to really figure out where the damage should go. It always looks best if placed in a logical manner.

This is my original Repenter, who is sitting in Ireland. This is the first Warmachine model I ever painted. I came upon these pictures when I searched through a mass of pictures I had stored. It is interesting to see the difference in painting styles. I think this guy was done in 2004 though I can't be sure. It was about the time Escalation came out I think. I find it hard to remember when I really began to play as it was very much a slow grow thing. Warhammer Fantasy was the dominant game in our group at the time and Warmachine was very much the junior partner

The metals are done very differently for sure. You can see, hopefully despite the poor pictures, that they have a much darker shade. For gold I tend to use a much brighter highlight now rather than shading down. I like the gold to be bright and reflective. Also the armour plates have a much stronger shading. This is fine but a difficult method to get correct and one I definitely hadn't mastered back then. I don't know if I have yet either! Most interesting is the tone of the miniature. What I have painted now is a very cold scheme whereas before it was much warmer.
Posted by redmanphill