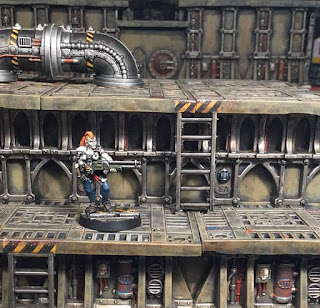 So while the picture shows off the Bounty Hunter I just painted it is also an experiment with getting a better background for photographing my Necromunda models. She is a little small in this one but I think it worked out fine with the back ground. I'll experiment further I think but so far so good. When I saw the rules for the Venator Gang appear in Gang War I knew that I had to paint some miniatures for one. The first model I found that looked right was an old Escher Ganger. She is a little on the small size in comparison to the current range of models but as she is unlikely to be fielded alongside any of those models I wasn't too worried. I wanted to go with a cold palette for her with some striking contrast in the hair. The photograph doesn't really manage to show off the pale skin very well, It was an old camera and I've never been that good at photographing models anyway. I'm very happy with how she came out and I'm looking forward to painting the next one.
Posted by redmanphill 202 comments: 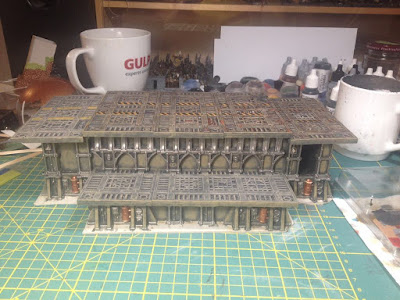 I showed you my WIP Necromunda building last week and now I'll show you one of the walkways that I mentioned in the article. It isn't totally finished either but it is very close to being so. I reduced the height of the Sector Mechanicum supports that GW make as I felt they were a little too high for the game. I wanted my gang to be able to scale ladders and run for cover in the same move rather than barely get up the ladder in the first place. I also wanted to be able to have more multi-level pieces without having to go really high. I achieved that nicely here with the half level which fits perfectly with this piece I made earlier. Again once this piece is finished I'll make a video and show it off. It doesn't need much more work so you'll see it sooner than last weeks building.
Posted by redmanphill 20 comments: 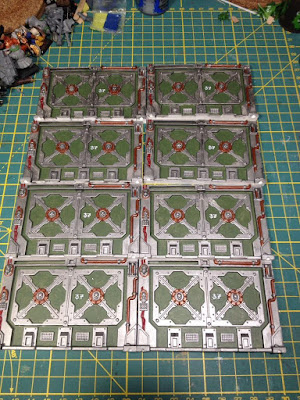 Sometimes I wonder why I start certain projects, this building is very much one of them. All seemed reasonable as I started but soon the error of my ways was revealed! It is hard to dedicate a lot of time to a single project and it is even harder to keep up motivation once the project is started.
As I have slowly been building up my section of the underhive I felt that I needed a proper building that could occupy a moderate chunk of the table, blocking line of sight, offering cover and give the walkways I have been working on something to connect to. Making a solid building with the Sector Mechanicum pieces just wasn't going to work, the time invested in making the pieces and then painting them was too high and so I turned to the bulkhead walls that come with the base Necromunda set to help me out. I cast the pieces for the ground floor and started painting them up. The repetitive nature of them was fine as I guess this is an industrial building and as such would be made without much thought to pleasing aesthetics. 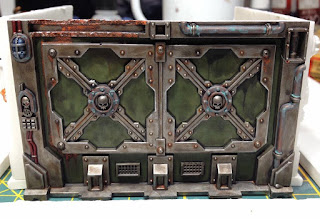 I painted them ´with a little more weathering than usual, this helped to hide the few mistakes I made in casting the first few bulkheads. It is always a process to learn how to demould these to keep the details intact but also to get the correct amount of plaster into the mould fast enough before it starts to set. That can cause breaks in the piece that seem to only reveal themselves when it comes to getting the piece out of the mould. The heavy weathering also keeps the piece from being too colourful on the gaming table and distracting from the action which should always be in the foreground. The weathering is mainly washes and a little Typhoid Corrosion from GW to give some texture to the rust. 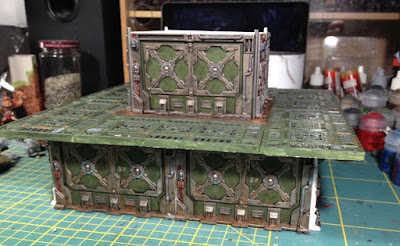 I don't want the building to be too tall as I can't store them as easily then. Also I don't think it benefits game play when the buildings are too tall. It impedes access to certain areas of the board, makes determinations of line of sight difficult and also gives long range weaponry a slight advantage. I don't see the confines of the underhive really containing massively tall structures except in very limited circumstances. I reduced the foot print on the first floor of the building to allow playable access to it. The walkways that go over this level will extend out just as far as the ones below providing some shelter and be at the perfect height to meet the walkways I have started work on. 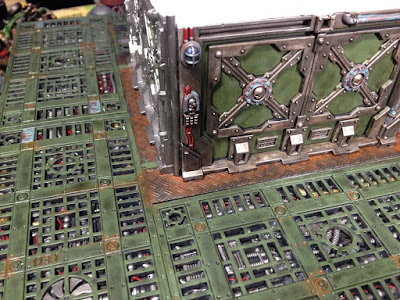 The painting of these structures takes me an age. I think I put a little too much effort into the first ones I built and now I feel like I have to match it across them all. Don't get me wrong, the effort is definitely worth it in terms of how the finish piece looks on the table. Its just that the sheer volume of the surface alone takes a while to cover solidly in paint and then going in to do the details is a whole other Sisyphean effort. I have cast the final pieces for this piece namely the walkway on the top. I haven't however gotten any further than you see here and it could be a long time before more progress is made. I'll film a video then and show it off. Fingers crossed it is sooner rather than later!
Posted by redmanphill 20 comments: 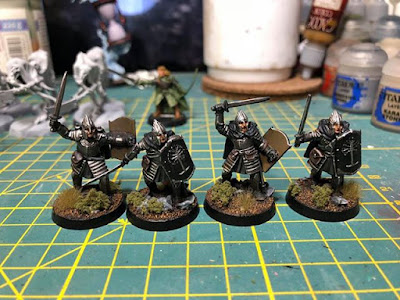 As we are playing our campaign in Osgiliath and I am using the Osgiliath Veteran warband for it, I felt that making some Veterans would probably be a good idea as I can upgrade to them in the long run. I didn't want to buy the nice but expensive models that Games Workshop were selling so I made my own. I like the models but only having three poses rather limits their use in my opinion. If there were a few different poses then I may have been tempted. Still the basic Gondor Troops are good enough and converting them turned out to be simple enough. On the front of the models I made small green stuff bags and pouches. These are simple enough to make and I didn't try anything complicated with them. I also added some extra belts to better match the commercially available models. 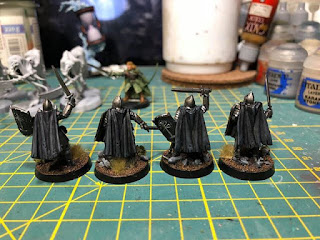 The finishing touch however was the addition of cloaks. These are taken from an old skaven kit and fit the scale perfectly. I wasn't sure how to best attach them and I only got it right on the final attempt. The first one I just glued on as it came and while its simple it doesn't look overly great. The next two I added some greenstuff to have the cloak come around the front of the neck. Its better but I didn't account for the bulk of where the cloak attaches to the model. After I had painted the model I felt the cloak didn't fall correctly over the shoulders. It looks fine enough and so I didn't correct them. The final model was done with the attachment points removed and this gives a much more natural feel to the cloak.

I don't know if I will need more of these Veterans in the future. I don't really think the spear option or the bow option is that much better than what a ranger or standard warrior would offer in most cases so I haven't made any. Maybe when I get to playing with the army I'll reconsider and get back to doing more.
Posted by redmanphill 5 comments: 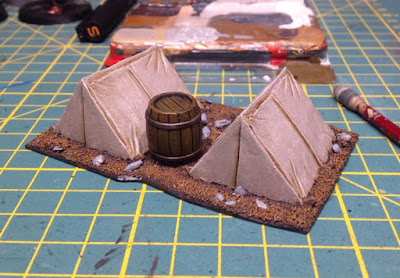 I've been working away on some Old West terrain for a while. As I am slowly building a complete town with a friend we need quite a lot of terrain. While buildings are fun to do we also need some more scatter style pieces. As the town represents a rapidly growing gold rush location we felt that some more temporary accommodation might be fitting. Having looked at the Dead Wood series we came to the idea that tents would be a common feature of towns like this as people arrive but can't afford to build a house straight away or live indefinitely in a boarding house. I tried making my own to varied success and finally felt that the effort wasn't worth it for the result and so I went in search of some alternatives online. 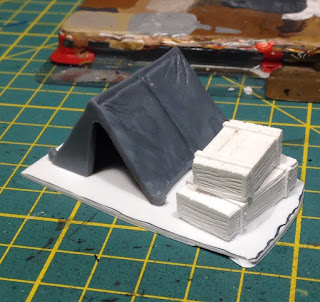 Renendra make some very nice generic tent pieces for a very decent price and as luck would have it when I went to order they were running a sale on exactly what I wanted. I think these are called dog tents and as they are very plain and simple they will work in almost any genre that I play. The scale is a little on the small size so for heroic 32mm scale they wouldn't suit but for everything else around the 28mm size these are perfect. I added some crates and barrels to the bases to add a little weight and some variance among the tents. I think I purchased eight in total and as there are only two varieties the additional pieces on the base helps differentiate them. I kept the painting simple with a stippled canvas colour.
Posted by redmanphill 8 comments: